I’ve been wondering about God. Particularly, how God could create a beautiful, intricate flower, and put it in the middle of a rainforest to open where no one would ever see it. Or put such care and engineering in magnificent and magical creatures, then sink them in the bottom of the ocean. There are galaxies light years away that have existed for eons and that may never be discovered, and still the stars burn bright.

That’s how I feel about the Frescoes in Charlotte. Especially the Benjamin F. Long IV Frescoes at the Bank of America Corporate Building and the Transamerica Dome, both of which stand nearly unnoticed as bankers, mostly men, in pressed pants and tailored dress shirts move quickly in and out of the highly secured buildings. 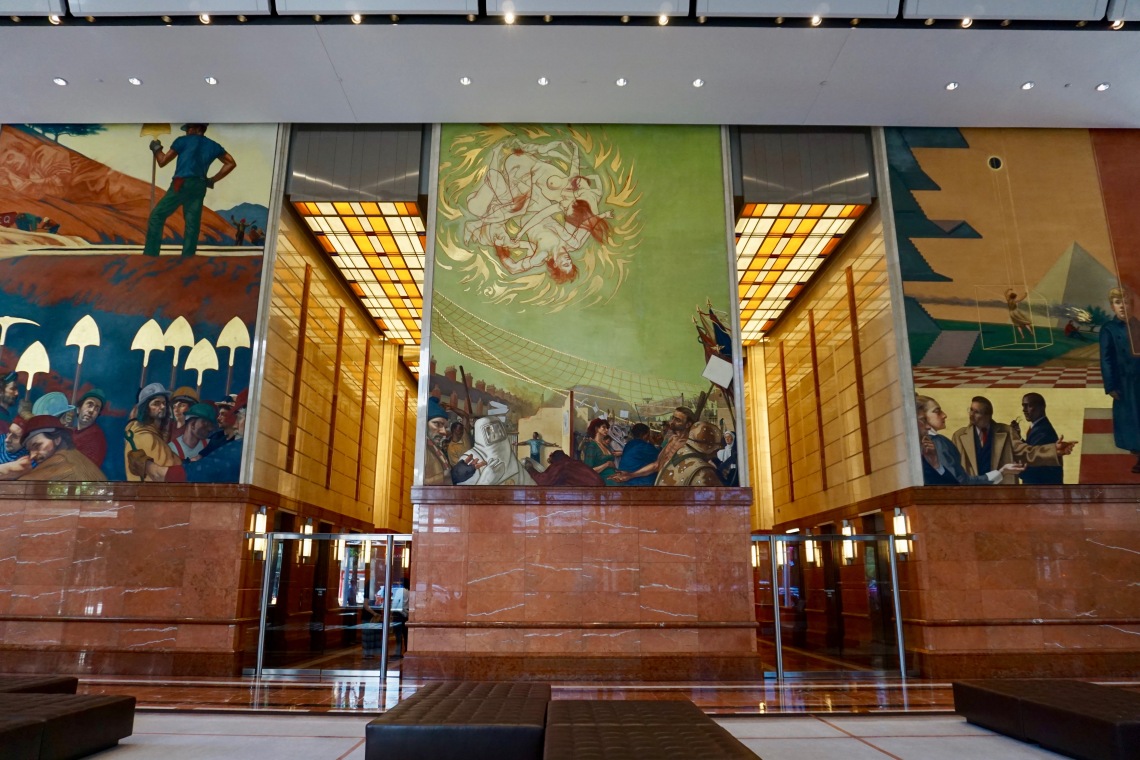 Long’s first secular work, and reportedly the largest secular Fresco in the United States, of which conspiracy theories abound. Completed in 1992.

Each of the three frescoes measures 18×23 feet. 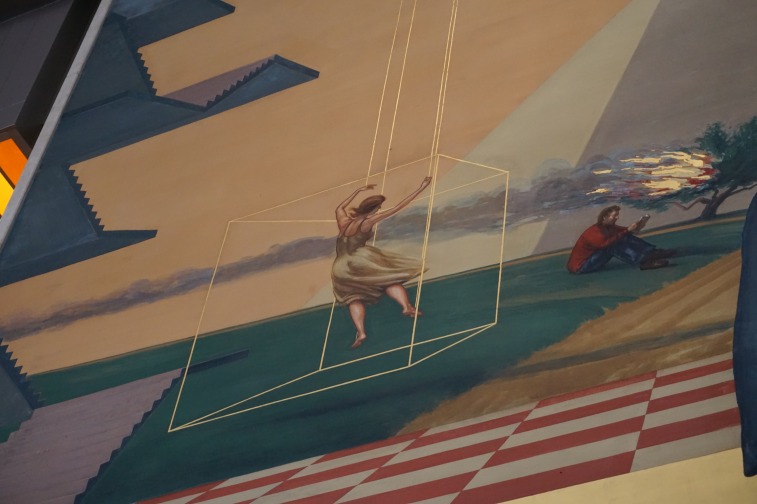 *Note – While I was taking photos a security guard approached me and informed me that photos were not allowed. My three-year-old daughter tried to show him her unicorn and asked him what his name was and where his mommy and daddy were – he didn’t answer. According to the Blue Ridge National Heritage Pamphlet I picked up (afterwards, when visiting the fresco at Montreat College) I see that *Photos are not allowed without permission. This is noted for all of the Charlotte sites we visited – although it does seem as though photographs are allowed at the Charlotte-Mecklenburg Law Enforcement Center).

The First Presbyterian Church in downtown Charlotte has been there for 200 years, the church building as it stands now originally built in 1857. 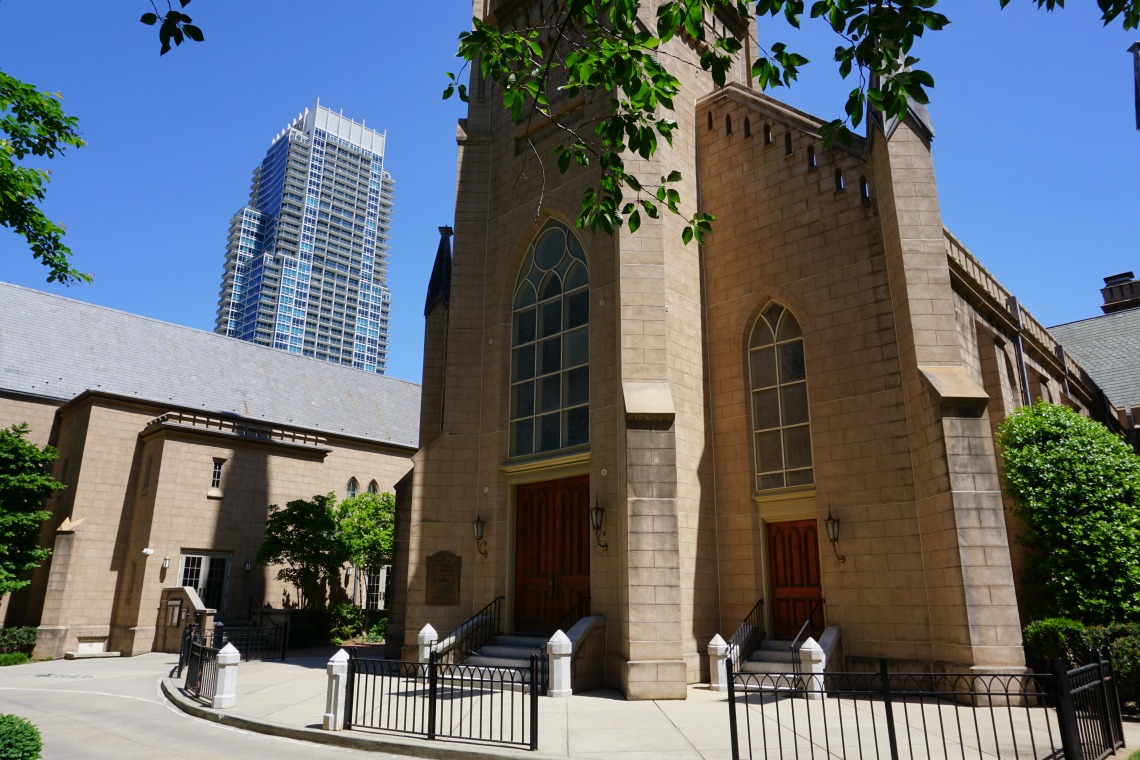 A Ben Long IV Fresco, entitled The Good Samaritan, measuring 8 feet high and 28 feet long, was created in the hallway of the Fellowship building of the church in October 2001. You can see the Fresco on Wednesday’s, from 11am – noon when tours are offered. We were there on a Thursday and all doors of the Church’s buildings were locked up tight.

Long’s first curved surface and outdoor fresco rests above a 3 story arched walkway in the building’s domed entranceway. 15 feet high and 30 feet in diameter, this fresco was completed in March 1998. Continuum represents the continuous nature of life, from birth to death, destruction to rebirth. 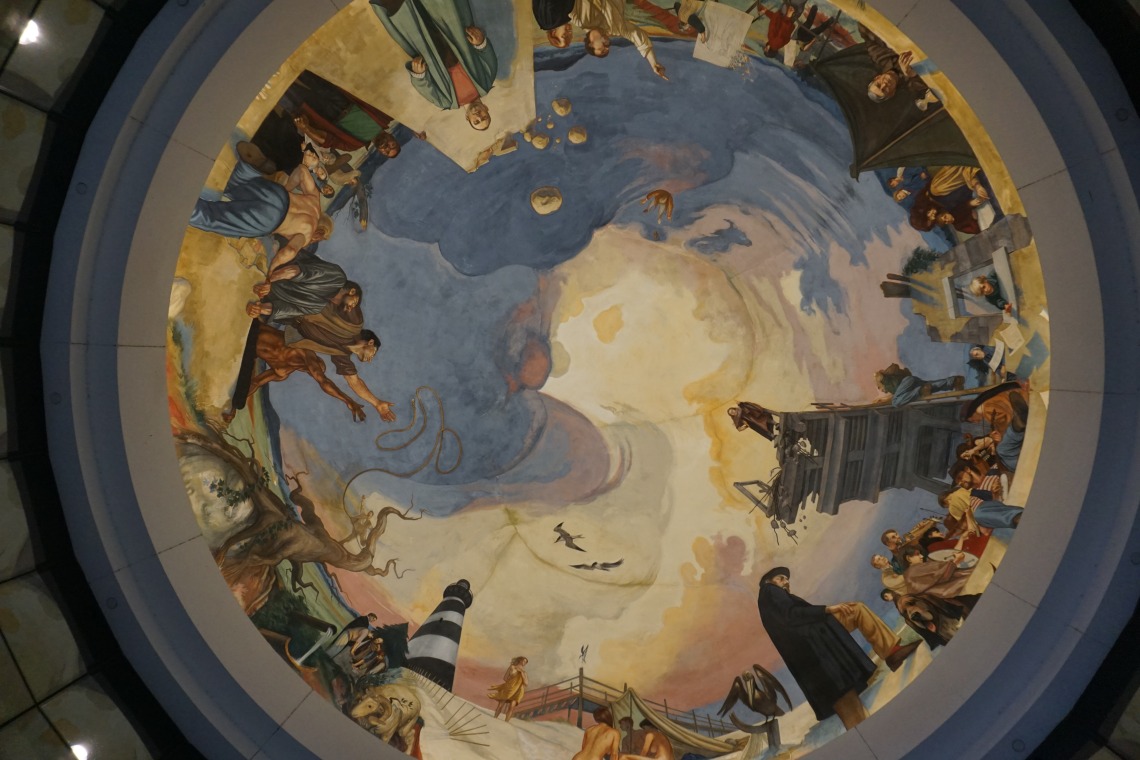 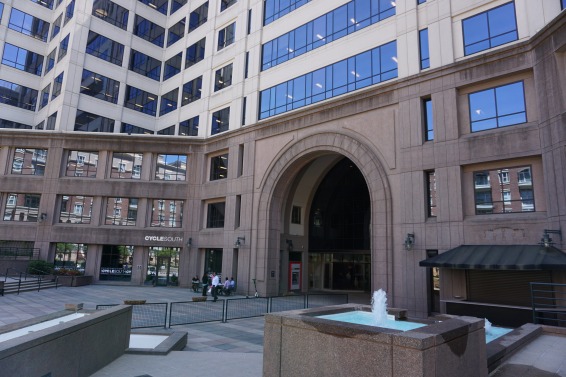 I walked by this building, with a tired toddler on my back, two times before double checking the address and going inside the domed archway to find the fresco. People hurried in and out of the locked double glass doors on either side, not looking up. On the other side of the entrance there was a beautifully sunlit green space surrounded by modern apartment buildings and fountains.

It feels a little odd to be standing in the midst of commerce and business, looking up at a piece of art that took months, if not years, to create and execute. But maybe we all need a little grounding in the looking up. I know I do.

Hi! I am a writer, trail diverger, and digger of hidden histories. I graduated from Chatham University with an MFA and wandered around the South for a bit before settling in Asheville, North Carolina. View all posts by Amy C Manikowski

This site uses Akismet to reduce spam. Learn how your comment data is processed.